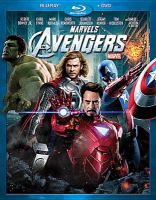 this movie is not perfect, but very good(better than age of ultron) as stan lee would say it is ...EXCELSIOR!

Avengers assemble! This film begins with Loki, Thor’s evil brother, who steals a powerful alien Tesseract. From there S.H.E.I.L.D’s director, Nick Fury, decides it is time to form a team, the Avengers. We are introduced to Captain America, Iron Man, Hawkeye, Hulk, Thor, and Black Widow. Personally, I like Black Widow because she is a strong, brave and fierce woman who can beat anyone up. One thing really interesting is how a few Marvel superheroes struggle with what it means to be a hero. This movie is filled with action and I’d say it is perfect for ages 10 and up! @grumpykat of the Teen Review Board at the Hamilton Public Library

The Avengers is sooooo good. You should totally watch it!

This looks good, but my dad wont let me see it.

The first few modern Marvel movies were already doing pretty well, but this film is when the franchise really took off and it's easy to see why. Even if you are, like me, not a fan of superhero movies, this one is worth watching. Joss Whedon ensures that while there are all the special effects one would expect in this kind of film, there are also interesting characters, and the effects do not overwhelm their stories. It would be hard to find fault with the cast as well, and Whedon manages the phenomenal trick of giving all 8+ major characters interesting things to contribute. Last but not least, there are the little touches of delightful humor with which Whedon is so adept. The Avengers is not just a good superhero movie, but a good movie.

A supremely well-written and well-directed film, with mind-blowing SFX action obviously, but also with a plot and character dynamics that get better every time you watch them. And for all that, it's not nearly the best MCU movie, but it was unquestionably a necessary prerequisite for the subsequent achievements that have surpassed it. Very highly recommended. (You do have to suspend disbelief pretty hard during the climax, as an entire invading army is being stopped by six people, but it's fun enough to be worth a "just go with it".)

If only all films had this budget! As always well done

Marvel comics just keep on going with this series that should have been shelved. Add a villain, add new heroes and the story continues on for eternity while these actors and directors make far too much money, shame on Hollywood's greed and the industry.

This movie was good, but since it focused on the original Avengers team for the most part, why no Ant-Man and Wasp? I also would have liked Ultron as the villain instead of Loki, who should only be in the Thor movies.

In 2007, Marvel was a fading commodity, still reeling from the disappointment of Spider-man 3. Then Marvel announces Iron Man. Iron Man? Really? A b-tier superhero who had a middling cartoon in the 90s. What was Marvel thinking?
Then Iron Man struck gold, put Robery Downey Jr. back on the map, and began the biggest fad in movies in twenty years: post-credit scenes. Marvel planted its feet and made a big gamble: we are building a universe.
Fast-forward through four more mostly good to great movies, and we get The Avengers. The build-up was huge, the movie was thrilling, and the payoff was bigger than ever. This movie was the biggest ever when it came out and broke records, all of which it deserved and more. Better yet? An even bigger post-credit scene teasing the biggest villain in Marvel and the greatest fight yet to come.
In hindsight, it's not even the halfway point, at the rate we're going. Seven years later, and the Marvel Cinematic Universe has grown into a massive hit, and it all began with the build-up to Marvel's greatest team. They might not protect the world, but be sure they'll avenge it.

This movie is an excellent introduction to the Avengers Initiative and I have very little complaints about it. It was well written and had numerous memorable moments that set the tone early on in the movie. I enjoy it very much and have no issue with rewatching it from time to time.

I checked out this movie over the Holidays when I had company in my home. It kept the kids very entertained while we were busy cooking and chatting. It is a fun story of friendship and learning about other people's strengths and weaknesses. Do Superheroes really have weaknesses?

The Avengers may be the best MCU film out. Thor: Ragnarok comes close, but there's something about the Avengers that tops it. It's just fun. There are slow parts, but they don't tend to drag like they sometimes tend to do. The battle at the end is just awesome and fun.

The Avengers is an action-packed movie filled to the rim with fight scenes, teamwork and humour! I wouldn’t know what my life would be like without this movie, it opens the gateway to many more Marvel films that will have you itching to watch the next. Trust me, I watched them all. I would recommend this to anyone above the age of 10, because of some of the violence. This movie is also perfect for anyone who likes action movies. I would give this film 5 stars for just the sheer amount of exciting battles. @Gasenic of the Teen Review Board at the Hamilton Public Library

I loved this movie! Watching all of the superheroes interact with one another was so entertaining, especially those with conflicting personalities, such as Captain America and Iron Man. The plot itself was very captivating, and kept me interested throughout the entire film. I would highly recommend watching some of the Iron Man, Captain America, Thor and Hulk movies ahead of time, to get a full appreciation of the characters and storyline. I think that the background adds an extra level of entertainment and anticipation throughout the movie. This is a movie that I could watch multiple times, and I definitely suggest that you give it a try too! @PenelopeScriptor of the Teen Review Board at the Hamilton Public Library

The Avengers (DVD) all the hero's from the other movies have come together for the first time in the MCU. This also the first time we see Hawkeye because we already seen the other Avengers already Ironman, Hulk (Black Widow was in Iron man 2) Thor, Captain America and this movie stared with the not like the post credit scene because what happen was they did a experiment with the tesseract and then Loki came throw a portal. The best super hero movie of all time like it says on the cover of the DVD cover. Every thing was good Introducing us to all the characters but the first the cast change with Mark Ruffalo as Bruce Banner/Hulk. But other then that every thing was perfect like it should be with the avengers that's the best thing with movies/shows/etc. When a group of hero's or people in a show or characters I should say how they all come together or they do crossovers but still that's what we all love to see. So the avengers are assembled but Captain America did not say that I don't why science that's a what Captain America the leader says in all the other versions of the Avengers. In the post credit scene we see Thanos the mad titian at the end of this movie. My rating is 4 out of 5 stars I forgot to give my rating out of 5 stars for Captain America The First Avenger so that I give 5 out of 5 sorry. @Ribjaw24 of the Teen Review Board at the Hamilton Public Library

Read a novel based on the screenplay weeks before I saw the movie. I followed some of the technical parts a little better reading them, but, of course, the action is much better onscreen.

Then when the Avengers finally get all Avengery... Yeah. I dig that.

Or the one with Galaga.
Well, this was it. Four-years in the making, five movies under the belt, and five-years before DC/Warner Bros. could produce their own superhero team film, Marvel Studios and Kevin Feige released [The Avengers], the mega blockbuster that changed superheroes, forever.
It is not hyperbole that many comics and film fans have said that we now live in the post-Avengers world. This film changed the public’s expectation of what a superhero film could and should be: amazing effects, fantastically polished, an incredible spectacle, invincible at the box office, mightily scored, and sensationally witty. There’s even an interesting villain! [The Avengers] remains excellent superhero-driven escapism. It was like the [Seven Samurai], but with a much happier ending in the immediate sense….
If you have been following the story, so far, Nick Fury, the director of the SHIELD spy agency, had spent the past few years on the search for unique, superpowered individuals to join a global peacekeeping initiative named, “the Avengers.” After the appearance of the Tesseract, a mysterious energy source, that could power weapons of awesome might and solve the world’s energy issues, Fury’s superiors order him to shelve the Avengers idea. That is, until Loki, the extraterrestrial God of Mischief, raided the SHIELD base were the Tesseract was guarded and stole it. Thus began a global search for the Tesseract, before Loki’s plan to rule the Earth with it could unfold. And to stop Loki, Fury has assembled the Earth’s mightiest heroes: the invincible Iron Man, the incredible Hulk, the mighty thunder god Thor, supersoldier Captain America, super spy Black Widow, and master marksman Hawkeye.
[The Avengers] is a grand, thoroughly enjoyable spectacle. Alan Silvestri returns to the MCU not only with pieces from [Captain America: The First Avenger] but also the now memorable theme for The Avengers. The CGI and sfx were both top notch. The cast is experienced and is strong, especially Robert Downey, Jr.—who stole every scene. Mark Ruffalo replaced Edward Norton as Bruce Banner / the Hulk, and, as third time’s the charm, his is now considered the best live portrayal of that character. The writing and direction, by Joss Whedon (known for Buffy, Angel, and Firefly), was very good, and he sure does have a talent for dialogue. However, I have always found the conversation between the Black Widow and Loki to be weird and unconvincing. The writing, direction, and acting for specifically the end of that scene just weren’t there. And thus, Whedon’s direction was very good but not perfect.
Moreover, the resting position of the Avengers after Thor struck Captain America’s shield with Mjolnir is incorrect, very incorrect.
But do not let these minor issues deter you from watching this most awesome of films.

Things being Repeated:
* “Stand down.”
* Shield throw, ineffective.
* “We have a Hulk.”

Spectacular, action-packed film describing the beginnings of the Avengers. The actors performed excellently in their various roles, especially Tom Hiddleston as Loki and Robert Downey Jr. as Iron Man.