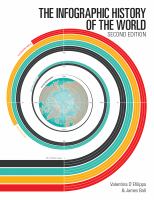 The Infographic History of the World

"The authors have put as much effort into the design as the data and their book is meant to entertain as much as to inform."
-- The Economist

The first edition of The Infographic History of the World was released only in 2013 but the world clearly has changed since then. The movement of millions of people around the globe, including the mass exodus of four million Syrian refugees, has altered almost every country on the globe.

At least 15 major conflicts erupted in 2014, resulting in the displacement of millions of individuals on virtually every continent. By year's end, a staggering 59.5 million people had been forced to flee as a result of persecution, conflict, violence, or human rights violations. Globally, one in every 122 humans is now either a refugee, internally displaced, or seeking asylum. If this were the population of a country, it would be the world's 24th biggest.

Climate change is also forcing migration. Since 2008, close to 175 million people living in developing countries have been displaced by geophysical or weather-related disasters.

This edition of The Infographic History of the World is updated to reflect this profound change in the human fabric. New infographics lay out the numbers and geographic movement of refugees, migrants and displaced peoples around the globe, showing where they originate and where they land.

Seventy-five topics and more than 100 infographics cover the entirety of the world's lifespan of 13.8 billion years. Four sections -- In the Beginning, Getting Civilized, Nation Building, and The Modern World -- present world history as a visual essay of facts, trends and timelines. The book's design cleverly mirrors the content, opening with parchment-like paper stock and primitive typography, progressing to glossy pages, minimalist design and color.

There are no comments for this title yet.

There are no age suitabilities for this title yet.

There are no summaries for this title yet.

There are no notices for this title yet.

There are no quotes for this title yet.

Find it at LPL